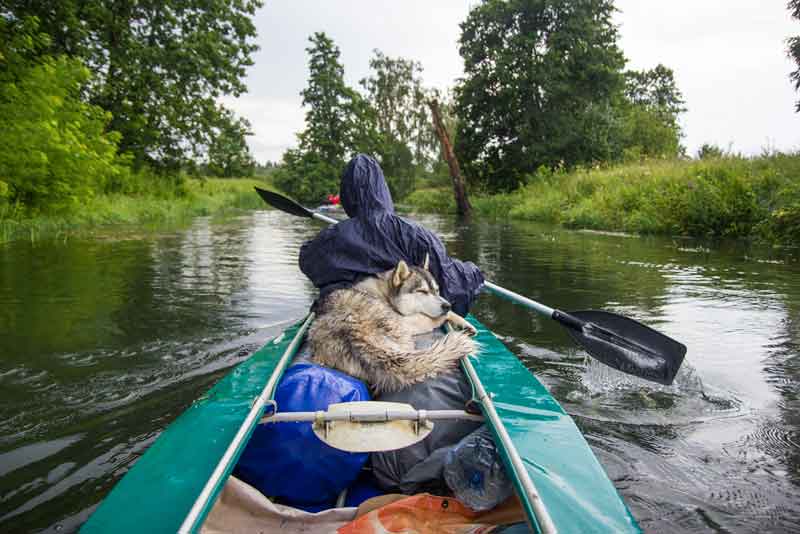 Inflatable kayaks are becoming increasingly popular because they are versatile and easy to store. They can be used in a variety of settings, including lakes, slow-moving rivers, and the ocean.

Some people use inflatable kayaks for fishing, while others use them for leisurely paddles on a weekend getaway. In addition, they can be easily transported in a car or RV, so they are perfect for those who like to kayak but don’t want to deal with the hassle of transporting a traditional kayak.

Inflatable kayaks are ideal for moving water because they are lightweight and easy to maneuver. You can use them on flat water rivers or lakes, but you should avoid using inflatable kayaks in whitewater rapids.

If you like camping, then an inflatable kayak is a good choice for paddling downriver to your campsite. You can avoid getting your feet wet by using inflatable kayaks on calm rivers.

If you’re just learning how to use an inflatable kayak, then flat water environments are best for practicing your skills.

Alaska is rich in lakes and rivers with excellent paddling opportunities. The most popular destination for paddling is Lake Clark National Park, which has about three dozen lakes. For wildlife fans, the best place to go kayaking is Katmai National Park, where you are likely to see brown bears fishing for salmon during the summer months.

Another great option in Alaska is Kenai Fjords National Park, one of the best places in the world for kayaking and wildlife watching.

When planning your kayaking trip in Alaska, choose a lake or river with campsites if you plan on camping out. You should also make sure that there are adequate facilities such as reasonably accessible public restrooms and trash cans.

If you are looking for a relaxing kayaking trip, then consider the Intracoastal Waterway. With more than 3,000 miles of protected waterways, there’s plenty of room to explore. One popular destination is the east coast of Florida because it has so many beautiful bays and inlets.

If you choose to kayak on the Intracoastal Waterway, then be aware that there might be heavy boat traffic in some areas. However, as long as you stick with the channel, then you will avoid most large boats and ships. You can use your cell phone to call for help if an emergency arises during your trip.

Ideal Uses for Inflatable Kayaks on Small Ponds and Lakes

Inflatables are perfect for paddling around small ponds and lakes. A popular destination is Lake Minnewaska State Park Preserve in New York, which offers 16,000 acres of protected waterways for kayaking.

If you prefer to kayak on saltwater environments, then there are some good options in Florida. There’s the Intracoastal Waterway along Florida’s east coast and Big Sarasota Bay near Tampa Bay.

One of the most popular destinations for river kayaking is the Big South Fork National River, a long stretch of protected land in Kentucky and Tennessee. There’s a wide variety of water environments in Big South Fork, which makes it a great place for kayaking and camping.

Disadvantages of Using an Inflatable Kayak

The biggest disadvantage of inflatable kayaks is that they are less durable than traditional boats.  If you leave your inflatable kayak out in the sun, then it will become damaged. Even a thin piece of fabric can cause serious damage if it’s left outside long enough for UV rays to damage it.

If you will be paddling in rivers with rocks and rapids, then you should pick out an inflatable kayak designed specifically for white water use. This kind of inflatable kayak is much more durable than a regular model.

Most people who use inflatable kayaks say that their best trips are on lakes or slow-moving rivers. Many inflatable kayaks are very heavy, especially if you fill them with extra equipment for camping. If you plan to take your inflatable kayak on multi-day trips, then consider buying a model in which you can attach your seat to the deck.

How Much Does an Inflatable Kayak Cost?

The price of inflatable kayaks varies depending on several factors. First, you will probably want to choose between single and double models based on how many people will be using the kayak. Second, you might want to choose between two-person kayaks and longer models designed for three people or more. Third, inflatable kayaks can be made of basic PVC material or ripstop fabric with an I-beam air chamber design.

If you’re looking for a do-it-yourself option to learn kayaking, then an inflatable kayak might be perfect. You can use the same inflatable kayaks as you would on lakes or rivers, but there are also some very good options for kayakers who want to go on the open ocean.

As long as you follow the guidelines outlined in this article, then you should be able to use your inflatable on any body of water with ideal results. Do your research on local kayaking regulations before using inflatable kayaks on public waterways, and make sure that you are aware of all safety restrictions.