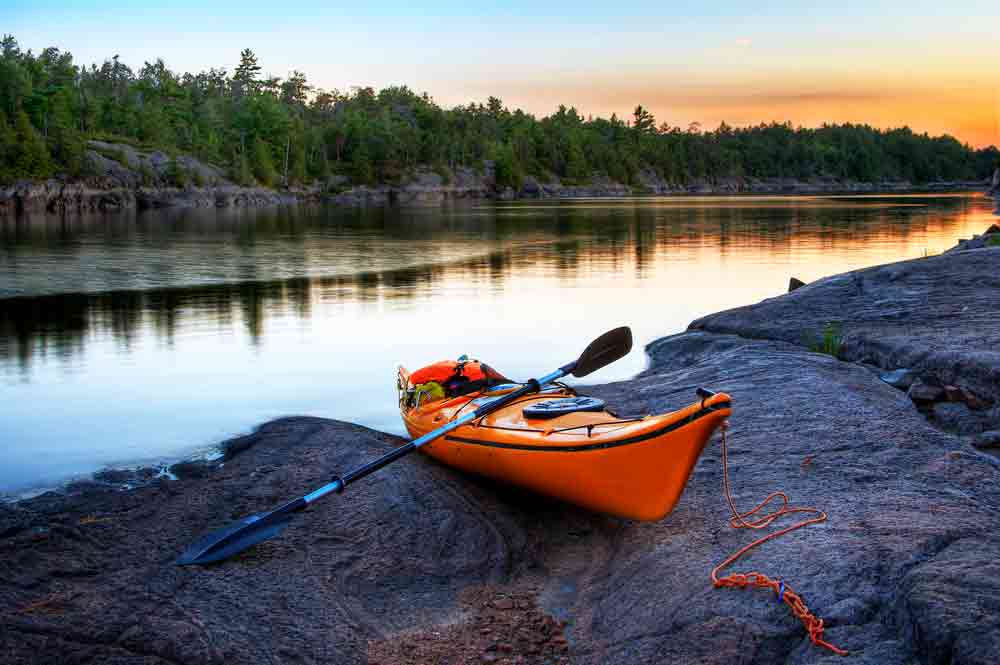 The lifespan of an inflatable kayak depends on a number of factors, such as how often it is used, how well it is taken care of, and the type of material it is made from. In general, inflatable kayaks have a lifespan of 5-10 years if they are used regularly. If they are only used occasionally, then their lifespan maybe 10-15 years.

Surf Inflatable Kayaks – designed for surfing, wave riding, and other fast-moving water generally made of thicker material than the other types of inflatable kayaks

Fishing Inflatable Kayaks – similar to surf kayaks in concept, but with retractable skegs for stability, etc.

Inflatable kayaks are typically made of polyester or nylon fabrics that are coated with PVC (Polyvinyl Chloride – similar to plastic). Companies may use different types of fabric between models, or even within the same model, to achieve different goals, such as increased durability or increased portability.

What Determines An Inflatable Kayak’s Lifespan?

The lifespan of an inflatable kayak depends on a number of factors such as how often it is used (regularly or occasionally), how well it is taken care of

If an inflatable kayak is used regularly, its lifespan can be up to 5-10 years. If it is only used occasionally, the lifespan maybe 10-15 years. The materials used to build inflatable kayaks also play an important role in the overall lifespan.

What is Hypalon CSPE for an Inflatable Kayak?

Hypalon is a specific type of material for inflatable kayaks made by DuPont. Many different types of Hypalon are used in several applications, including marine and industrial use. CSPE stands for Chlorosulfonated Polyethylene Elastomer, which is a thermoplastic synthetic rubber that has good resistance to oils and fuels.

Although there may be other types of materials used to build an inflatable kayak, the majority will use CSPE as it is known for its durability and resistance to abrasion.

Inflatable kayaks have been around for a while now and have been increasingly popular amongst the paddling community recently. They’ve grown in leaps and bounds and there’s a model for everyone out there.

If you’re looking to get into the inflatable kayak world, or are thinking about picking up your first-ever inflatable kayak, be sure to read through our Beginner Inflatable Kayaks Buying Guide before purchasing one!

The Difference Between Hypalon and Pvc

1. It is lighter than PVC materials, so it may be preferable for kayak construction to reduce the overall weight of the inflatable kayak.

2. The high-temperature resistance of CSPE is much better than PVC’s, so this makes CSPE more suitable for use in inflatable kayaks that are exposed to high temperature such as on the water surface on a sunny day or in the car on a hot summer day.

3. Hypalon has good weather resistance, especially its oil resistance is much better than PVC’s, so it’s very suitable for inflatable kayaks that are frequently exposed to oil and other materials.

4. Hypalon has excellent resistance to aging, so it has a long service life.

5. It is not easy to dissolve in water, so it usually doesn’t have an impact on the water environment.

6. The ozone resistance of CSPE is very good, so CSPE Hypalon is widely used for inflatable airbags that are exposed to ozone.

7. It has good electrical insulation performance, so it is widely used for wire and cable insulating materials in the automobile industry, etc.

8. Hypalon CSPE has excellent resistance to compression set, this makes inflatable kayaks that are made of Hypalon can be easily folded away into a small package after use, so it is very suitable for inflatable kayak travelers to carry on their backs.

Inflatable kayaks are very easy to clean. If there is a little dirt on the surface, just use a wet cloth or sponge to wipe it clean. On average, inflatable kayaks can be used for 2-3 years without needing much cleaning.

As mentioned above, CSPE Hypalon has good weather resistance and is not easy to dissolve in water, so it is pretty resistant to the weather. However, inflatable kayaks are not waterproof, so they should be dried up quickly after getting wet or placed under the sun if left stationary for a long time.

If you find any leaks in your inflatable kayak, please contact your supplier immediately about repair services.

How Often Do I Need to Inflate My Kayak?

Most inflatable kayaks can hold air well if you take care of them, for example, by inflating the kayak when it is not in use. It’s best to fully inflate your kayak once a month or so. You should also keep an eye on your kayak as it is getting old, and make sure to replace inflatable kayaks with holes or leaks as soon as possible.

Inflatable Kayak Types How Much Do They Weigh?

Inflatable kayaks are suitable for most people to carry, the weight of most common inflatable kayaks is around 30-40KG. It may vary depending on the materials used and the size.

When not inflated they will take up a small amount of space in a closet or trunk, which makes them very convenient to store.

Be aware that Hypalon kayaks are a bit heavier than PVC kayaks.

Most inflatable kayaks can hold up to 120-150KG, which is usually more than enough for average people. If you want a little extra room in your kayak though, it doesn’t hurt if you go up in size.

Do Not Inflate Your Kayak More than Necessary.

Most inflatable kayaks have around 3-4 chambers, so inflating them to their maximum limit is already pretty tough. If you want more capacity for weight, try out a few of the different positions of hatches before deciding on one.

Inflatable kayaks are fantastic to take on vacations or road trips, which allows you to carry your kayak everywhere conveniently. Whether you are looking for a cheap inflatable kayak for use around the house or need an inflatable boat that can support heavyweight and harsh usage, there’s certainly an inflatable kayak out there that fits your needs.